Meet the experienced and friendly doctors and staff who make Saxonburg Family Eye Care the leading provider of vision care products and services in Saxonburg. 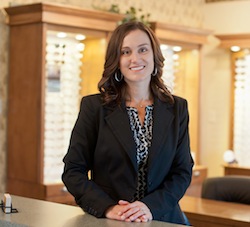 Dr. Amy Peterson attended the University of Pittsburgh at Johnstown for her undergraduate studies. In 1998, after three years at Pitt, she was one of seven students to receive early acceptance to Pennsylvania College of Optometry where she earned a Bachelors of Visual Science in 1999 and went on to complete her formal optometric training and earn a Doctor of Optometry Degree in 2002. Dr. Amy practices full scope family optometry in our Saxonburg office with emphasis on pediatrics, specialty contact lenses, treatment of ocular disease and LASIK management. Dr. Amy is trained and specializes in LASIK pre and post surgical management and has received several awards from TLC Laser Eye Centers for her work with laser vision correction. She is an active member of the American Optometric Association (AOA), Pennsylvania Optometric Association (POA), and the Western Pennsylvania Optometric Society (WPOS). She is also a member of the National Board of Examiners in Optometry. She is a past President of the Tarentum Area Lions Club, which focuses on raising money to help the vision impaired and is involved in the vision screening for preschool children. She enjoys spending time at home with her husband, Dr. Jeff, their daughter Madelyn, their son Carter, and their dog Artie, who can be quite a handful! She keeps busy at home painting and sewing and when she gets time to herself, she enjoys reading also! 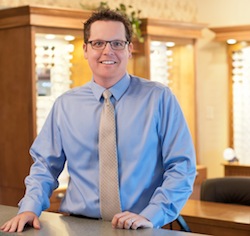 Dr. Jeff attended the Pennsylvania State University where he received his undergraduate degree with High Honors in Pre-medicine in 1998. He continued his education in Philadelphia, where he earned his second bachelors degree, a Bachelor of Visual Science in 1999. He completed his formal training by earning his Doctor of Optometry degree from the Pennsylvania College of Optometry in 2002. Since 2002, he has practiced full scope family optometry in Saxonburg with an emphasis on contact lens care, treatment of eye infections, and glaucoma. He is also trained in the co-management of LASIK patients. He is an active member of the American Optometric Association (AOA), Pennsylvania Optometric Association (POA), and the Western Pennsylvania Optometric Society (WPOS). He built and currently maintains the computer system at the office which has allowed the office to switch to completely electronic records in 2008. Dr. Jeff lives in Mars Pennsylvania with his wife Dr. Amy Peterson, their daughter Madelyn, their son Carter, and their dog Artie. He enjoys “working around the house” and spending free time with his families and friends.

“Consistently courteous, professional and clinically competent. If other healthcare providers were of the same quality, the nation would be transformed!”

You can schedule your next eye exam with us online!